What is dating and why do we even need it? Here is mine theory. I have not cross-referenced it with existing sciency literature, thus, it could lack originality or could be just nuts (it’s really just some random thoughts). The theory naturally follows from several observations, so I start with those. Medical science has a good understanding of how a perfect, textbook, human body looks like. In reality, a perfect body does not exist. It is just an idea that is useful to understand what is right and what is wrong with a patient. A deviation from this conceptual body can help in classification. Noteworthy is that there has been a considerable change in classifying deviation into the right and wrong. Many diseases that were classified before as a subject for a treatment, today let roll on their own.

Nature never creates perfect bodies, because it is not sure how a perfect body looks like. The process of a human creation by nature can be understood as following. Design a perfect, textbook, body and then introduce disturbances into some system of the body. The disturbances are known as mutations, and the whole process is known as evolution. Put differently, nature randomizes human bodies and then the environment trims the randomization that was not useful. It is conceptually indistinguishable from how a programmer develops a code of a program. There is a core functionality and over time the programmer introduces features and see if they make the program better. The key difference is that the programmer controls the “trimming” process. He’d know very well which feature came through testing and which require further testing because they are promising, but initial tests were not very successful. Well here is an amazingly awesome news. There is a conceptual analog of a programmer. A woman. Natur is agnostic about which features became successful and which were not. Let’s start with counterposition. If there were no women then the progress of medical science (with its moto “no pain is great”) generates this: 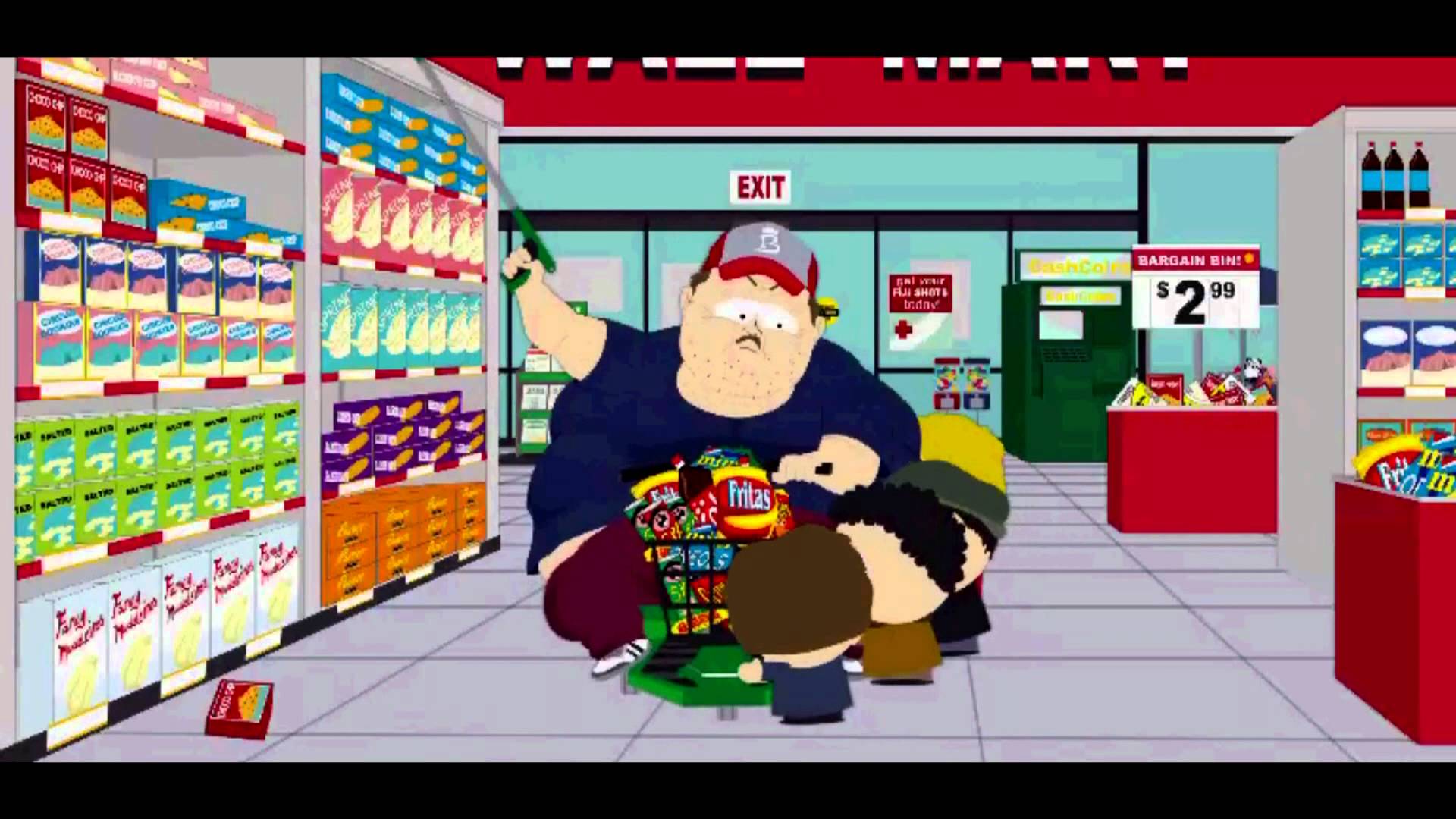 Ok, that might be obvious. So, having woman improves the sorting process and trims unsuccessful mutations. But how exactly? This is the best bit. The process of a woman picking a man has exactly the same characteristics as a patient picking a doctor and a firm picking a worker. When you come to see a doctor you would like him to know medical stuff more than you do. When you come to see a surgeon you would like him to make right choices during surgery when you are asleep and unavailable for consultation. The problem is that when you see a doctor you see a head, two legs, and two arms. These observables are not very useful to infer the unobserved characteristics of a person that actually matter for you. That is why you use potentially useless and silly observables as proxies for unobservables that matter.

Let me start with “a flip of a coin in the vacuum”. Imagine all people have perfect, text-book bodies, they are exactly the same. Then people can form a group to archive the economy of scale (to hunt elephants or to produce iphones or to make healthy fat well-nourished kids) with anyone. Then one does not need friends, family or anyone really. There is no need to designate anyone as special. If you feel like having a beer or sex you just talk to the next person next to you ask if he/she don’t mind and just do it. The same happens with kids, you have kids and if you need anyone to babysit you just give a kid to a next person on the street. One does not even have to go home in the same place every night. Just crush to the closest bed. This is a benchmark.

Now imagine nature intentionally introduce noise to every person. Sort of introducing random features and then the environment needs to test the feature by killing the versions that are no good. Now people are different and they possess characteristics that could be useful in the current environment or could be useless. Now it matters who is in your group. To form groups quickly our brain can classify people into a bad person (immoral people) and good person (moral person). There are even the whole institutions that people created to facilitate the sorting, reputation and even… church. The church is kinda like education, it helps to send signals about types. A religious person is an unconditional contributor (speaking a language of public goods provision game). Religious people are usually intense, so for them, it is a computational shortcut (it requires extra commentary, don’t worry about it at this point. In short, usually, people spend tons of time to sort people into bad and good and to come out as good. That’s what peoples’ brain is hardwired to do. Some of us decide not to spend too much time strategizing, but simply contribute all the time (hard working people, like productive scientists), but they expect others to contribute when it is crucial for them).

A family is a special case of a group. A man possesses some properties that are unobserved, thus a woman chooses observable as a proxy. Good physiqueis good, but it is not a sufficient indicator for skills. Money is better. Both already serve as a better proxy, they convey more information. Those observable are more likely to indicate strong providing properties of a person. A woman also wants a man to be responsive to incentives, thus, non-cognitive skill also matter. A woman wants someone who has good social skills. This approach refines the sorting process and makes it very intelligent; you could be narcoleptic, so you probably will lose a fight with a crocodile and won’t survive in a forest a day, but you still do fine as a scientist. In this manner, a narcoleptic gene still persists in the population even though it manifests in a really really weird behavior of passing out randomly during the day. It is not designated for trimming, the opposite it designated as a potential feature that might over year constitute a “perfect” text-book body.

It could be shown that if the world consisted of identical people a woman would interact with whoever is closer, thus it could be stated that the total amount of time a woman interacts with a man (in aggregate) is:

S is given, it could be that interaction is needed due to a physical property of environment (a group is necessary because there are many dinosaurs or food is scarce, thus several people need to search for it to get a healthy fat kid). For the reasoning at hand is it given. M is a number of men in the social fragment. If all men are the same then a woman is indifferent, thus all stock of man is used because time per a man (T) is high. If the environment is too risky, woman are too cautious and they socialize with less and less per man, thus for given stock of men and in a given environment more and more men are designated for being trimmed. 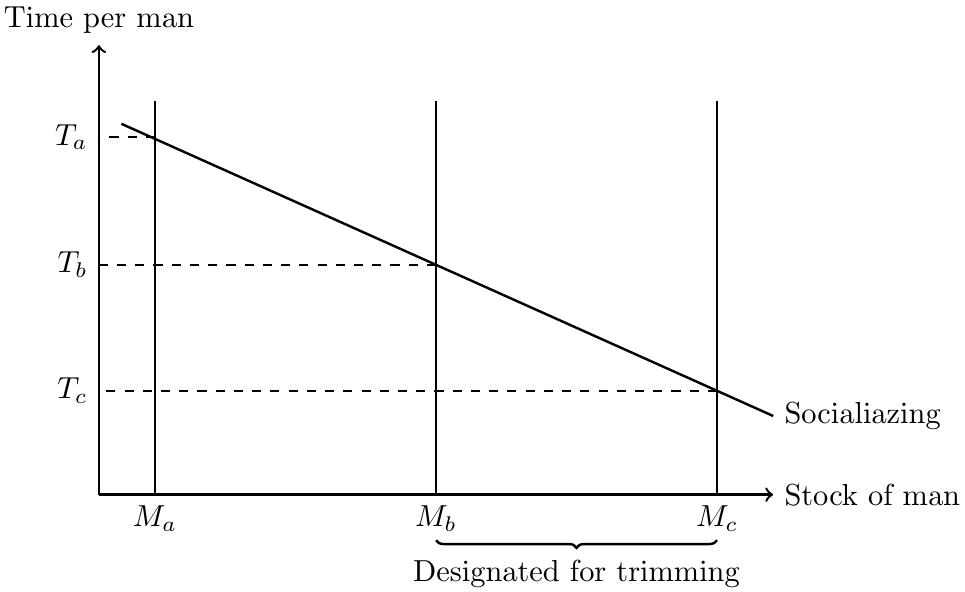 I think that this conjecture naturally follows the idea that is advocated by any famous social scientists that ever existed (e.g. Hayek, Friedman). People have evolutionarily developed to construct social structures and they do work with fantastic efficiency. States, markets, mating all of these examples of social structures existed way before scientists had any say in it. People should interfere as less with those as possible, any interferences have to be very gentle. A woman has to be free in her choices because if she is not, then tons of terrible men are not trimmed.